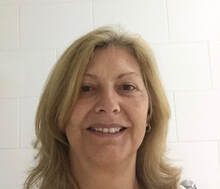 ​
FRANCES DI LAURO
Frances Di Lauro is a Senior Lecturer in the Department of Writing Studies at the University of Sydney. An interdisciplinary scholar, formally trained in archaeology and religious studies, she has taught rhetoric, argumentation and digital writing since 2004. Her research expertise lies in the analysis of communicative texts and artefacts be they works of apocalyptic or otherworld literature, letters, chronicles, works of performative art, exhibitions, films, monuments and songs. Presently she examines the restorative power of literature that emerges from crises that generate incongruity and fear of imminent catastrophe and death in the tomes of Dante Alighieri, Giovanni Boccaccio, John Milton and Bob Dylan.
Website Profile: https://www.sydney.edu.au/arts/about/our-people/academic-staff/frances-dilauro.html#collapseBio

​JAMES DIAMOND
James A. Diamond is a full professor and the Joseph and Wolf Lebovic Chair of Jewish Studies at the University of Waterloo and former director of the university’s Friedberg Genizah Project. His principal areas of study include biblical exegesis and hermeneutics, medieval Jewish thought and philosophy, Maimonides, and rabbinics. He has published widely on all areas of Jewish thought.  He is the author of Maimonides and the Hermeneutics of Concealment (SUNY Press, 2002) which was awarded the Canadian Jewish Book Award; Converts, Heretics and Lepers: Maimonides and the Outsider (University of Notre Dame Press, 2008) awarded Notable Selection- Jordan Schnitzer Book Award in the Category of Philosophy and Jewish Thought for best book in 4 years (2008); and Maimonides and the Shaping of the Jewish Canon, published by Cambridge University Press in 2014. His most recent books are, Jewish Theology Unbound published by Oxford University Press in 2018, and Reinventing Maimonides in Contemporary Jewish Thought, co-authored with Menachem Kellner (2019)
He is also co-editor of Emil Fackenheim: Philosopher, Theologian, Jew (Brill, 2008) and Encountering the Medieval in Modern Jewish Thought (Brill, 2012). His articles have appeared in many of the leading peer reviewed scholarly journals, including Harvard Theological Review;  Journal of Religion; Vetus Testamentum; Journal of Jewish Thought and Philosophy; Association of Jewish Studies Review; Jewish Studies Quarterly; Jewish History; Philosophy and Literature; Journal of Religious Ethics; Medieval Philosophy and Theology; Prooftexts; Jewish Quarterly Review; Journal of Jewish Studies as well as a periodic contributor to such popular forums as the Jerusalem Post and Mosaic.

AUBREY GLAZER
R. Dr. Aubrey L. Glazer, author of God-Knows-Everything-Broken: The Great (Gnostic) Americana Songbook of Bob Dylan is senior rabbi of Congregation Shaare Zion, (Montreal, Canada) and director of Panui (San Francisco, California), an incubator for contemplative practice and conscious community building. Aubrey has dedicated decades researching, publishing, teaching and performing piyyut in many incarnations as well as translating and collaborating with contemporary Hebrew poets and paytannim. Aubrey is a teacher in demand in many contexts, from federations to rabbinical school seminaries to universities and Jewish meditation retreats. A fuller list of his numerous publications can be viewed at: https://aubreyglazer.academia.edu/
​ 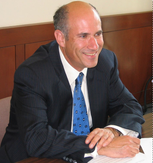 JONATHAN KARP
Jonathan Karp is Associate Professor of Judaic Studies and History at Binghamton University of the State University of New York (SUNY). From 2010-2013 he served as executive director of the American Jewish Historical Society. He is the author of The Politics of Jewish Commerce: Economic Thought and Emancipation in Europe (Cambridge, 2008) and has co-edited five volumes on a wide array of topics, most recently The Cambridge History of Judaism in the Early Modern Period (2017) with Adam Sutcliffe, and World War I and the Jews (2018) with Marsha Rozenblit. His forthcoming book is Chosen Surrogates: How Blacks and Jews Together Transformed American Culture.
​
​LORELAI KUDE (TBD) 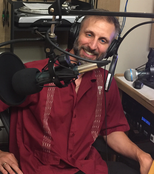 ​DANIEL MACKAY
Daniel Mackay, PhD, is the producer and co-host of Hard Rain & Slow Trains: Bob Dylan & Fellow Travelers, a weekly radio show broadcast on KEPW (97.3 FM) in Eugene, Oregon. He teaches writing at Lane Community College. He is the author of The Fantasy Role-Playing Game: A New Performing Art, many articles on literature and culture, and the editor of books on culture, social justice, and theology. Since 2019, he has assisted Olof Björner with the writing and editing of Björner’s massive About Bob website: one of the most important Dylan online resources that collects and collates information on sixty years of Bob Dylan recording sessions, musical releases, and important life events. Mackay lives in Eugene, Oregon with his wife and daughter.
On the Show
Hard Rain & Slow Trains: Bob Dylan & Fellow Travelers is a weekly radio music program featuring the music of Bob Dylan, his contemporaries, and his antecedents broadcast every Thursday from 8-9 pm PST on KEPW (97.3 FM-LP). The show includes a weekly news segment relating newsworthy Dylan-related stories and celebrates Dylan’s catalog of over six hundred songs through a weekly Twitter poll that asks listeners who did the song of the week better.  Daniel Mackay & Jeff Harrison began the show in February of 2019 to celebrate their appreciation of Dylan’s music. In February 2021 Hard Rain & Slow Trains celebrated both the completion of its second year on the air and its one hundredth episode. The complete archive of all past episodes is available at the link above or through most major podcasting platforms.

​AHAVAH OBLAK (MODERATOR)
Ahavah Oblak is a nonprofit activist--engaged in development work and grant writing for several Oregon/national nonprofit organizations. Currently residing in Eugene, OR, she is also a US/Israeli citizen.
Ms. Oblak possesses 30 years of experience working with small and large nonprofits, Jewish groups, Tribes, multicultural communities, alternative schools & educational programs, environmental and arts and cultural organizations.
Her academic background includes an MS in Folklore Studies from the University of Oregon (2012) where she was an integral part of the creation of the Oregon Folklife Network and the revival of Oregon's TAP Program while a Graduate Research Fellow. Other degrees include an M. Ed and a Minor in Native American Studies (Southern Oregon University) and a BS in Elementary Education with a Minor in Art History (University of Wisconsin-Madison). 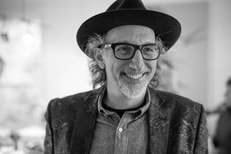 ​Talk description
Seth Rogovoy, “Bob Dylan: Prophet Mystic Poet” multimedia presentation
As in the book of the same title, “Bob Dylan: Prophet Mystic Poet” explores the deep and profound influences of Dylan’s Jewish background and scriptural roots on the Nobel Prize-winning rock poet’s life and work. With reference to audio tracks, photographs, rare video, and lyrical analysis, viewers will appreciate how Dylan’s intimate familiarity with Torah, Talmud, and Kabbalah has worked its way into his songs and public utterances, his embrace of Israel, and the Jewish outreach organization Chabad. Discussion will reflect on how Dylan can best be seen and appreciated as a Jewish artist. 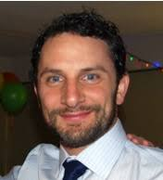 ​JOSHUA ROSE
Rabbi Joshua Rose is the rabbi at Congregation Shaarie Torah in Portland Oregon.  He is a fifth-generation rabbi.  His Jewish path has led him through the diverse worlds of the Reform, Orthodoxy, Jewish Renewal, and now Conservative Judaism - experiences he draws on in his teaching and rabbinic leadership. At the moment his favorite Dylan moment is the 1984 set on Letterman, because “Jokerman” and “License to Kill” fill him with energy and joy every time.  He lives in Portland with his wife Channah, a lawyer, their three sweet boys Eliav, Akiva and Rafael, and their terrier Ethel. 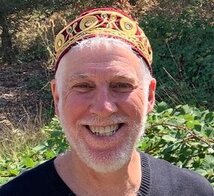 ​JONATHAN SEIDEL (MODERATOR)
Rabbi Dr. Jonathan Seidel, a new Jersey native, UC Berkeley PhD (1996) ALEPH Ordination (2004) is an experienced Jewish educator, singer and academic who has published in the areas of Rabbinics, kabbalah, midrash, magic studies, interfaith, environmental issues, Jewish ethics, philosophy, and folklore. Jonathan teaches a variety of courses in text and Judaic studies at the University of Portland and in several Adult Education arenas and is currently the Spiritual Leader of Or haGan in Eugene and the Visiting Rabbi of the Aquarian Minyan of Berkeley. He is also the Rosh Yeshivah of a new online school of Jewish studies there and everywhere in cyberspace! He also currently serves as the Vice President of the Eugene Interfaith organization IPSI.  Dr. Seidel has also been instrumental in building a number of non-profits devoted to the Arts and Jewish culture and is delighted to be the Rabbinic director of the Oregon Jewish Culture Project.

​ROB SEAN WILSON
Rob Sean Wilson is a Western Connecticut native who was educated at the University of California at Berkeley, where he received a doctorate in English and was founding editor of the Berkeley Poetry Review. He has taught in the English Department at the University of Hawai'i at Manoa and Korea University in Seoul as a Fulbright professor, and was twice a National Science Council visiting professor at National Tsing Hua University in Taiwan. Since 2001, he has worked as professor of American literature, creative writing, and poetics at the University of California at Santa Cruz. His books of poetry and cultural criticism include: Waking In Seoul; American Sublime; Asia/Pacific as Space of Cultural Production; Global/Local: Cultural Production and the Transnational Imaginary; Inside Out: Literature, Cultural Politics and the New Pacific; and Reimagining the American Pacific: From 'South Pacific' to Bamboo Ridge and Beyond. With a lengthy chapter on Bob Dylan as a poet of multiple conversions and trickster ironies and masks, his study Be Always Converting, Be Always Converted: An American Poetics was selected by Choice as an Outstanding Academic Publication in 2010. Beat Attitudes: On the Roads to Beatitude for Post-Beat Writers, Dharma Bums, and Cultural-Political Activists was published by New Pacific Press in 2010 and reissued on Kindle Books in 2020; he administers two related social groups on Facebook called "Beat Attitudes: World Becoming" and "Rethinking World Literature." Other essays on Dylan have appeared in the journals boundary 2 and Los Angeles Review of Books as well as in Taiwan, South Korea, and Hong Kong.

​​ELLIOT WOLFSON
Elliot R. Wolfson, a Fellow of the American Academy of Jewish Research and the American Academy of Arts and Sciences, is the Marsha and Jay Glazer Endowed Chair in Jewish Studies and Distinguished Professor of Religion at University of California, Santa Barbara. He is the author of many publications including Through a Speculum That Shines: Vision and Imagination in Medieval Jewish Mysticism (1994); Language, Eros, Being: Kabbalistic Hermeneutics and the Poetic Imagination (2005); Alef, Mem, Tau: Kabbalistic Musings on Time, Truth, and Death (2006); Venturing Beyond—Law and Morality in Kabbalistic Mysticism (2006); Open Secret: Postmessianic Messianism and the Mystical Revision of Menahem Mendel Schneerson (2009); A Dream Interpreted within a Dream: Oneiropoiesis and the Prism of Imagination (2011); Giving beyond the Gift: Apophasis and Overcoming Theomania (2014); Elliot R. Wolfson: Poetic Thinking (2015); The Duplicity of Philosophy’s Shadow: Heidegger, Nazism and the Jewish Other (2018); Heidegger and Kabbalah: Hidden Gnosis and the Path of Poiesis (2019); Suffering Time: Philosophical, Kabbalistic, and Ḥasidic Reflections on Temporality (2021).

​DAVID ZASLOW
Rabbi David Zaslow has been the spiritual leader of Havurah Shir Hadash in Ashland, Oregon since 1996. He is the author of “Thou Shalt Wander,” a collection of original poetry. In addition, he has written many interfaith books to help heal the divide between Christians and Jews. His book “Jesus: First-Century Rabbi” was awarded the Church-Synagogue Library Association’s “Book of the Year” in 2016. For many decades he has studied the underlying spiritual influences of Judaism in the music and lyrics of songwriters like Leonard Cohen, Paul Simon, Carol King, and Bob Dylan. 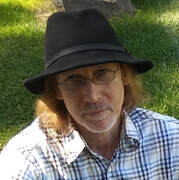 ​SAMUEL ZINNER
Samuel Zinner, Ph.D. (University of Nebraska-Lincoln, 2002) is a scholar of ancient and modern history, literatures and linguistics, and a Holocaust researcher. He contributed to German Scholars and Ethnic Cleansing 1920-1945 (Oxford/New York: Berghahn Books, 2004), which was awarded the American Library Association’s prestigious “Choice Outstanding Academic Book of the Year Award” for 2005. He has contributed articles to Holocaust and Genocide Studies (Oxford University Press), Religions/Adyan (Doha International Centre for Interfaith Dialogue), and other academic journals. His books and essays on ancient and modern history and literature have been published internationally in a variety of languages.

​At the University of Nebraska-Lincoln Zinner concentrated in modern and ancient languages and literatures, history, and Museum Studies, with a further emphasis on archival studies. He has worked on projects funded by major grants from the National Endowment for the Humanities (NEH).